It happened. About a month ago, when we were talking, Clare let me have it with “OK boomer”.

After the second or third “OK boomer”, I finally retaliated with “OK, child of boomer”.

Her response? “Mom, that makes no sense, whatsoever.”

For those of you out of the loop, the phrase “OK boomer” became an internet sensation in 2019 when a younger member of New Zealand’s Parliament hurled it at an older colleague in response to heckling. Someone made a TikTok video out of it, and it went viral. Now all the “kids” are using it.

For centuries, generations have struggled to understand one another. Older generations feel marginalized and undervalued. Younger generations feel like they have so much to contribute, but they’re dismissed as young and inexperienced and not given opportunities to prove themselves.

This generates the negative perception of millennials by older people that they’ve got it figured out, and the old farts “just don’t get it”, OK boomer. And so the torch of youth and know-it-allness is passed.

Labelling generations is a relatively new phenomenon. It started in the twentieth century, and took off mid-century when a large glut of babies were born post-war, creating the “baby boom generation” or Boomers.

As an official boomer myself, I usually try to take the high road whenever there is a generational dispute and try to see it from the other person’s perspective.

But I will confess it doesn’t help when millennials have to give a name to things that make it sound like theirs was the first generation to ever grow up. For instance, every time I hear a twenty-something use the term “adulting”, I just want to change their diaper.

This week’s #HappyAct is to either take the high road or the low road the next time you run into a generational dispute. You could try to bridge the generational gap by seeking to understand their perspective. Or if you take the low road and have fun taking the piss out of a millennial. Your choice.

OK child of boomer, gotta bounce, but if you think this post is lit, give me a RT, will ya? 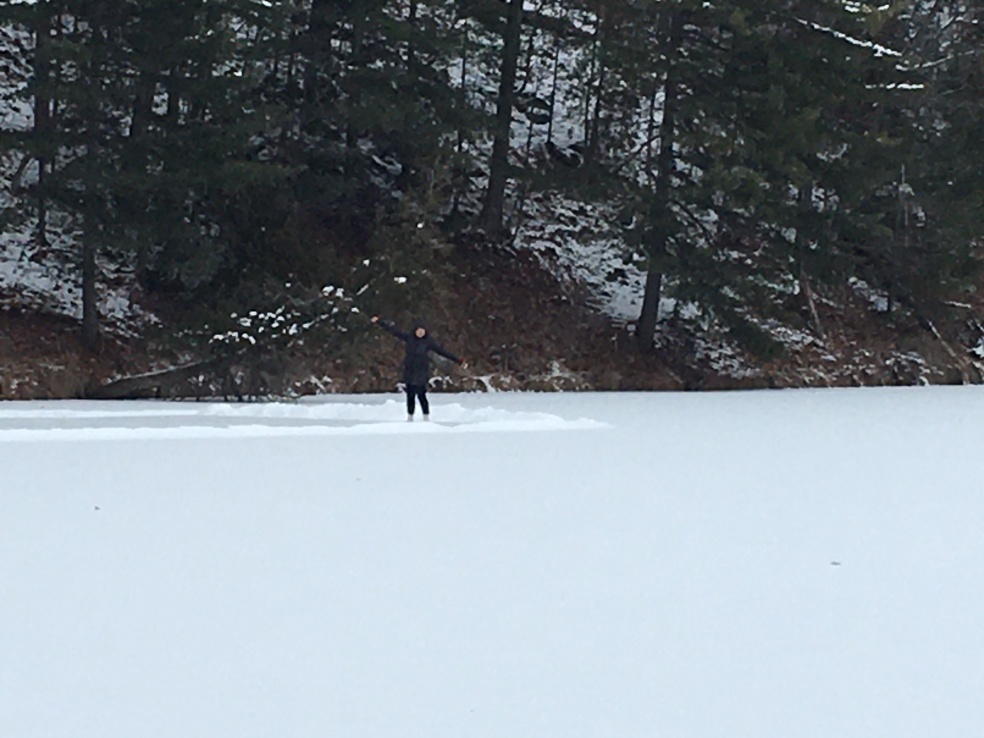 Dear Santa. I started this note to you on Facebook the other day, but had to cut it short since I had to get to work.

I saw Rudolph on the ice this morning crossing the lake with Dancer and Prancer.  I think they were here on a recon mission. It’s a good thing our lakes are frozen, that way you can travel faster Christmas Eve. I messed up in the kitchen the other night so you may get store bought cookies left out. Hope that’s OK. By the way, the kids were hoping you could define naughty for them. I think they’re getting nervous.

I’m a little late sending you my Christmas wish, but most of the items on it are things you can work on year-round after you deliver toys to all the good girls and boys on Tuesday night. Here it is.

All I Want for Christmas 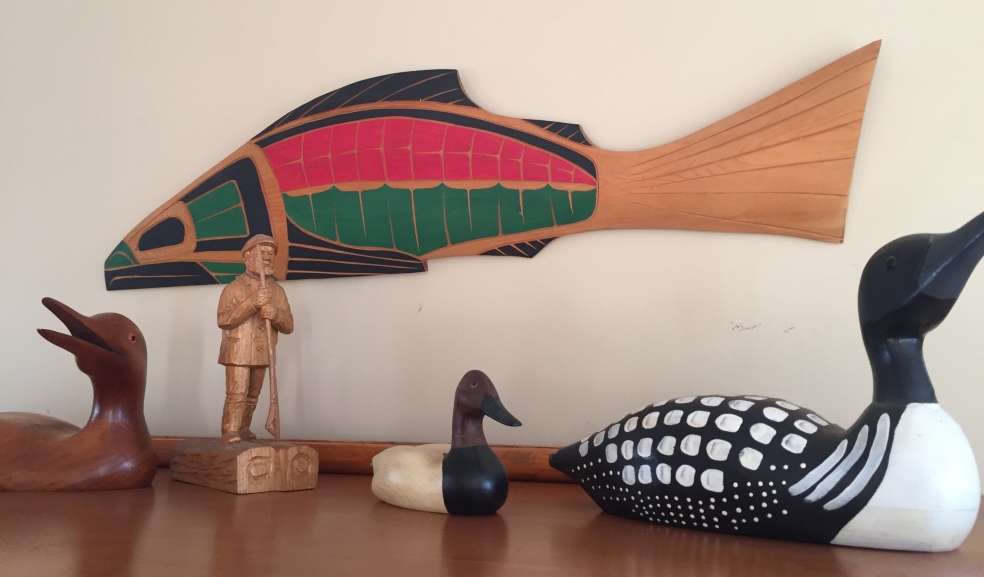 First, let me start by saying no artefacts were hurt in the writing of today’s blog and no disrespect to anyone personally, but screw you Marie Kondo.

Marie Kondo is the Japanese organizing expert and author of the best selling book The Life-Changing Magic of Tidying Up whose craze of decluttering and minimalist philosophy swept North America a few years ago. People started throwing items they didn’t need or were just collecting dust in the spirit of simplifying their life.

If you Marie Kondo’d your house, and it made you happy, good for you. I happen to like my stuff and embrace clutter.

It’s not the things themselves, although I find them all beautiful and make my house feel like a home, it’s the memories they represent.

The two stained glass cardinals that sparkle in the sunlight in my living room window remind me of Dave’s mom and his Dad.

The original watercolour of a fish hovering over a lake by local artist Alana Kapell has a spiritual quality and reminds me how lucky I am to live on a lake, and the fish are calling.

A framed handpainted feather of a tropical bird reminds me of the trip Dave and I took to Costa Rica before the kids were born. 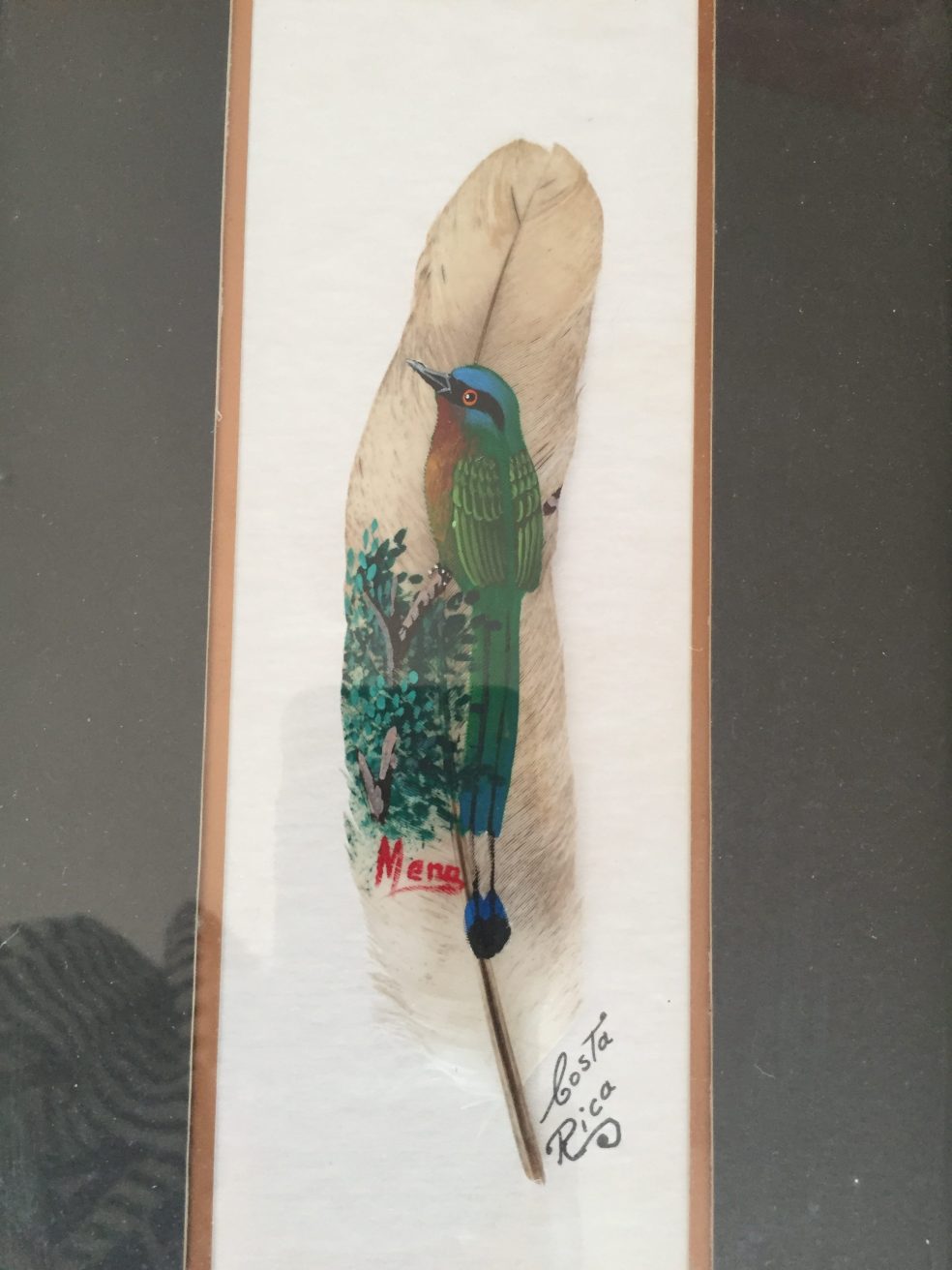 The beautiful hand carved wooden mirror with a rose made locally in Perth Ontario and given to us by my best friend for a wedding present reminds me of Leslie and our wedding day.

The hand carved loons and bold beautiful native fish carving above our entertainment unit reminds me of trips to the St. Lawrence River and Vancouver Island.

These are all my favourite things and I love them. So screw you, Marie Kondo. In the spirit of the holiday gift giving season, embrace your favourite things, find that perfect gift and memory for someone and enjoy. 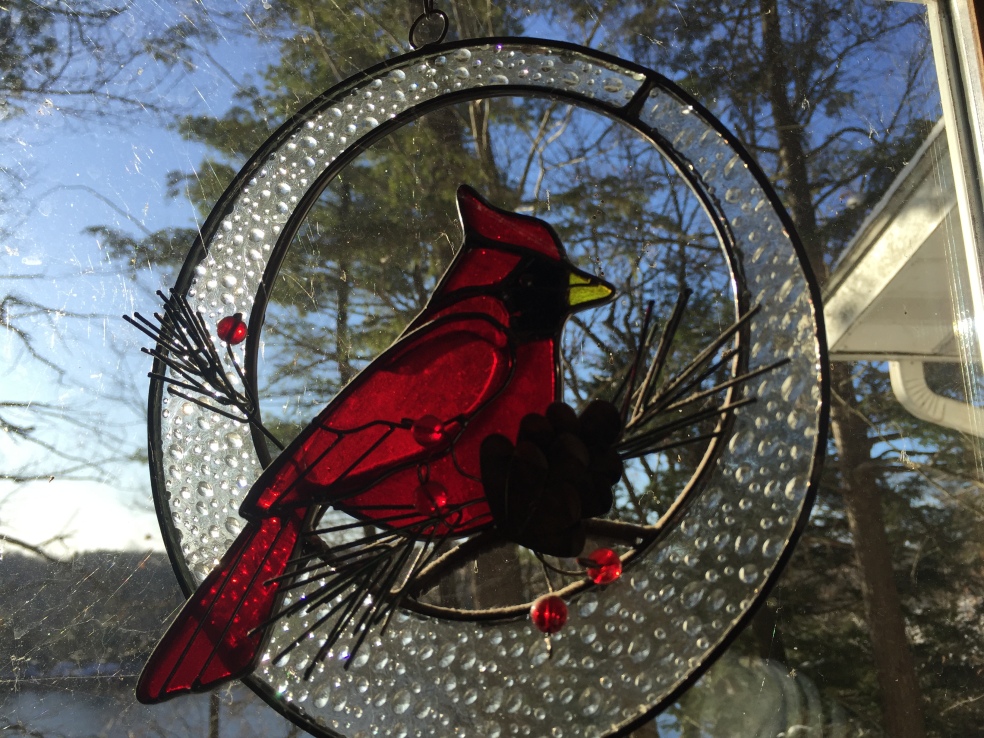 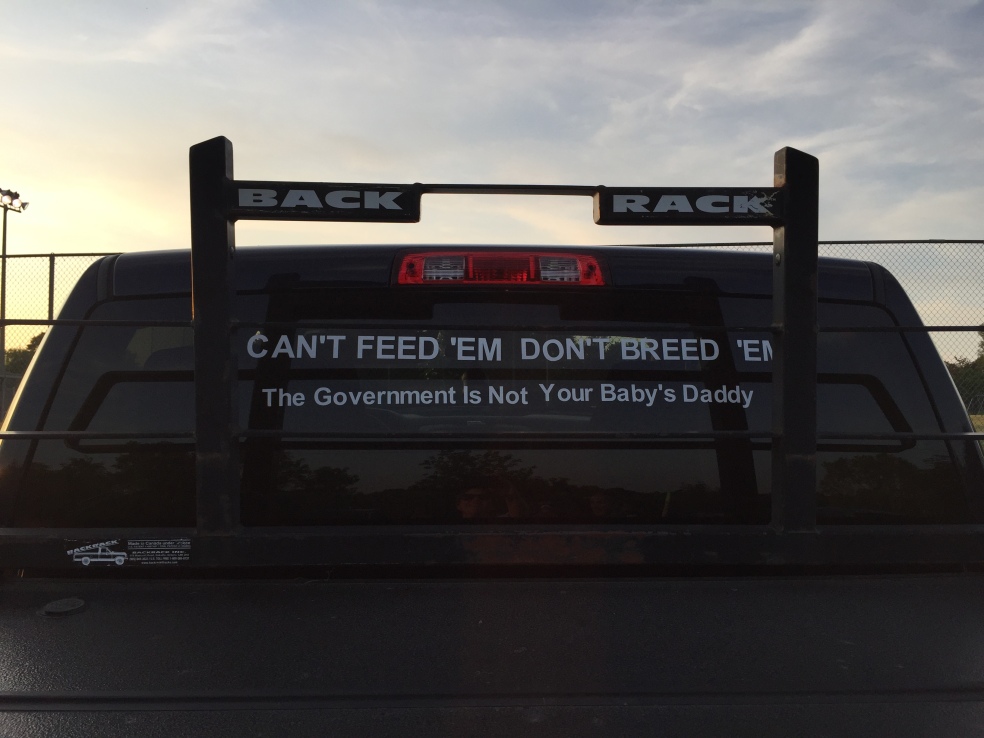 It’s taken about 20 years, but I’m now proud to admit I’m a redneck, hillbilly, field and stream-lovin’ country gal now. One of the things I love about living in the country are the signs.

My local hardware store one day in August had a sign that said,

I thought, really? It would have killed them to go 50%? And god help the kid at the cash who would have to calculate what 45% was off the order instead of just cutting the price in half. I didn’t stop to take a picture of that sign that day, but thought I’d share some pictures of other funny signs I’ve come across or friends have shared online in the past few months.

Above: Someone at baseball practice had this one on the back of their pickup. Country livin’ at its best. 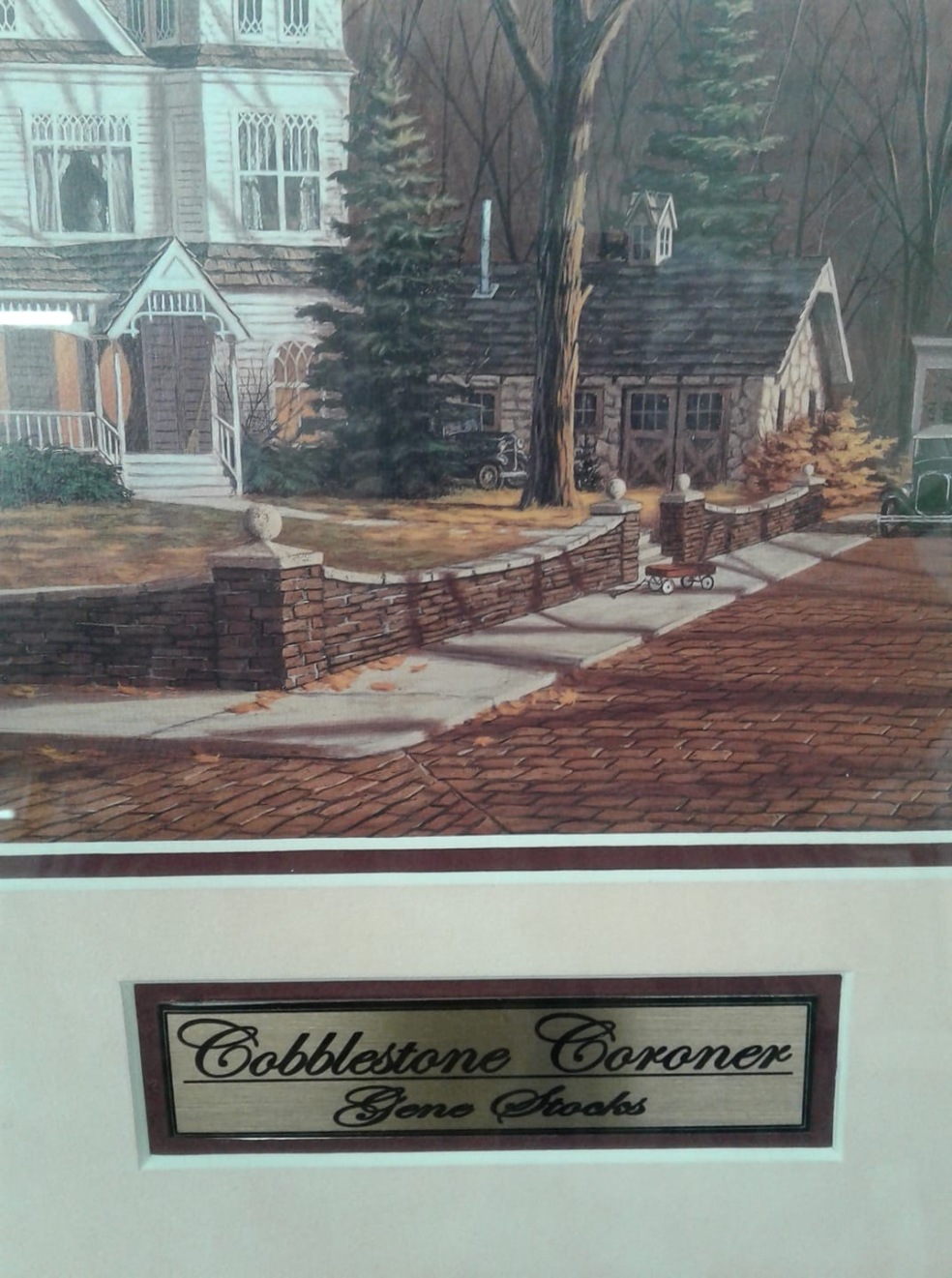 My friend Kaye shared this one. She was pretty sure it should have said “Cobblestone Corner”, but who knows, maybe the guy was a coroner 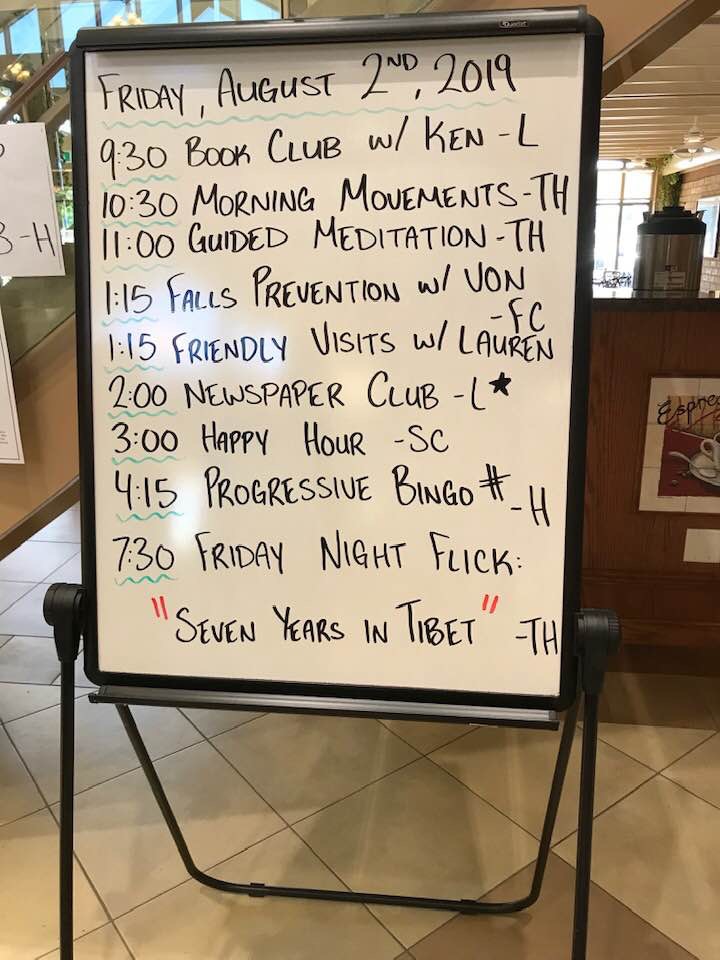 Sign at a senior residence. The line up for the 7:30 activity was apparently out the door. Thanks to my friend Jill for sharing this one. 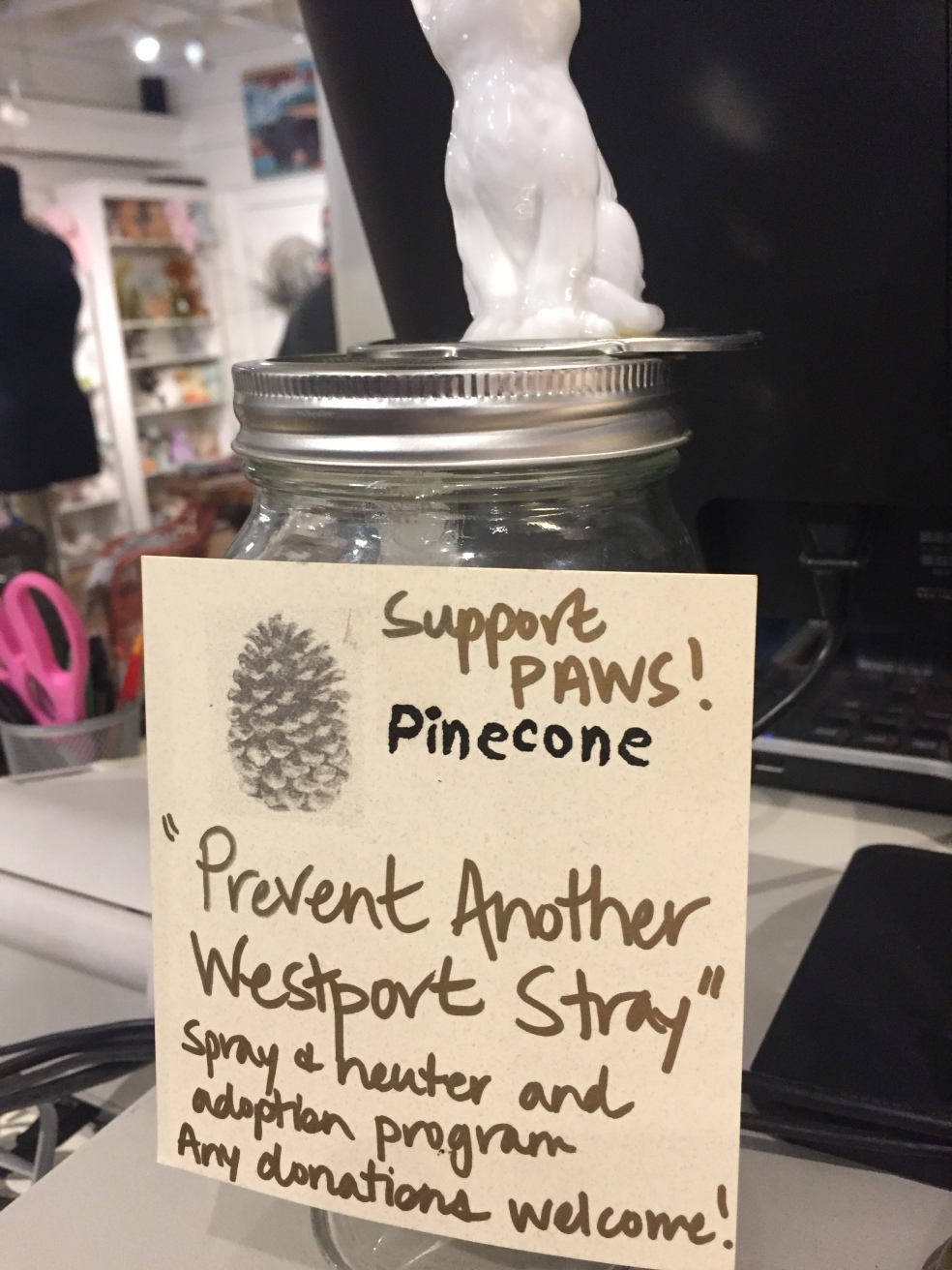 In Westport, I guess they spray their animals instead of spaying them! 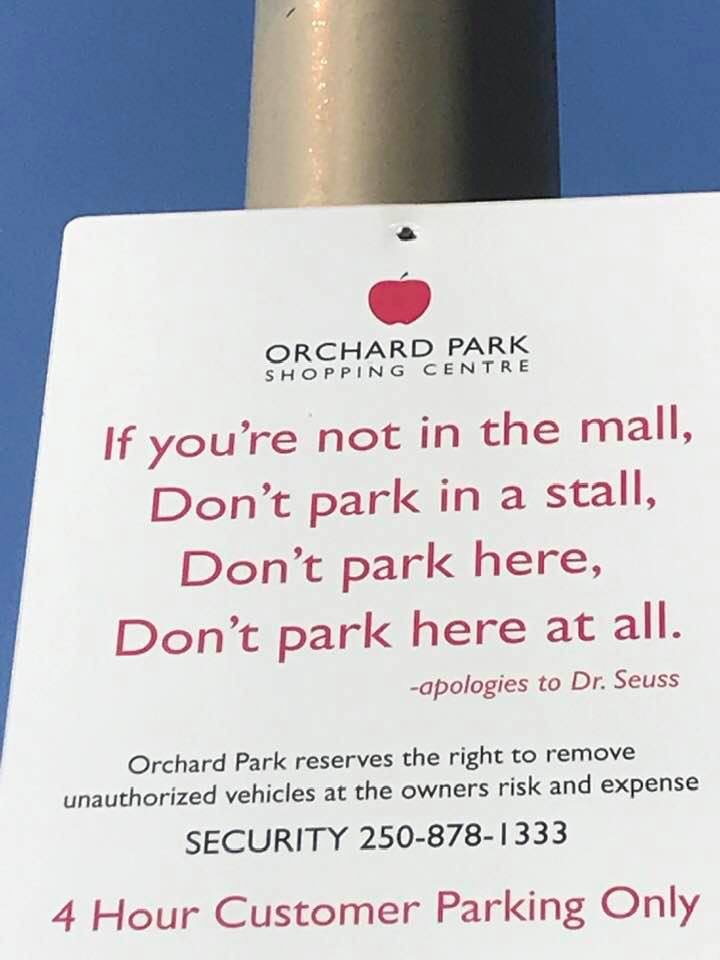 Dave’s cousin in BC shared this one, a creative parking tribute to Dr. Seuss 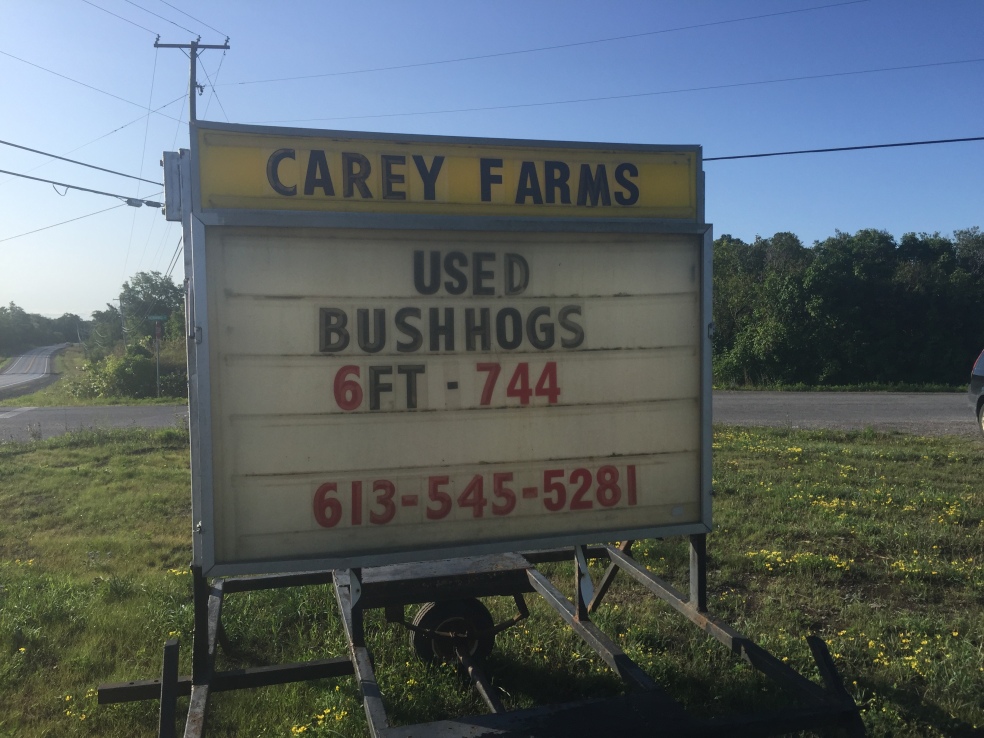 And finally, I’m not sure what a bushhog is, but I sure to heck hope it’s a piece of farm equipment! 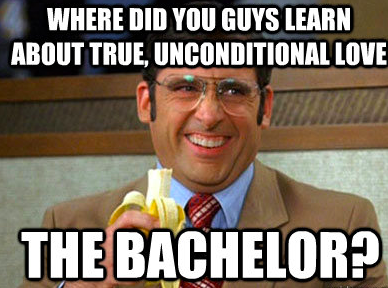 With Valentine’s Day around the corner, the girls and I thought we’d share our observations on love and relationships from our favourite show, The Bachelor. 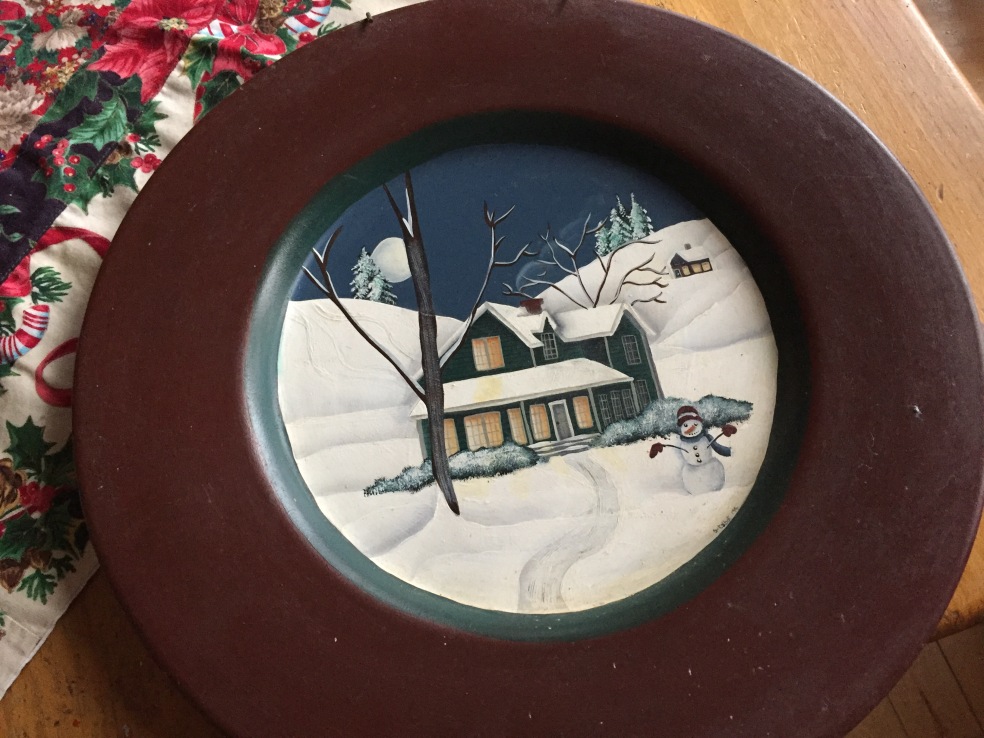 It’s legendary in our household–the tale of the tole-painted plate.

Years ago, when Dave and I were first dating, I had taken a folk art painting course. I was terrible at it, but my instructor was very talented and at the end of the course I bought a beautiful tole-painted plate of a wintry scene.

It was December and because I felt so guilty spending money on myself before Christmas, I wrapped up the plate, wrote “To Dave” on the tag and tucked it under the tree.

To this day, I still hear about it, but somehow all three of us–Dave, me and the plate have survived 27 years of marriage.

I think he secretly cherishes the tole-painted plate. He says every time he looks at it he thinks what a lame gift it was and that I’m psychologically scarred because I can’t just buy something for myself and feel good about it.

My response is at least I don’t buy ice fishing huts and gear and hide them in the barn from my wife.

This week’s #HappyAct is when you’re out frantically finding that perfect last minute gift for the someone special on your list, buy a little something for yourself. I do have one little problem this year though. The thing I bought for myself I can’t exactly write “To Dave” on the tag. Guess I’ll have to give it to myself from Bella. Dogs are very good shoppers after all. 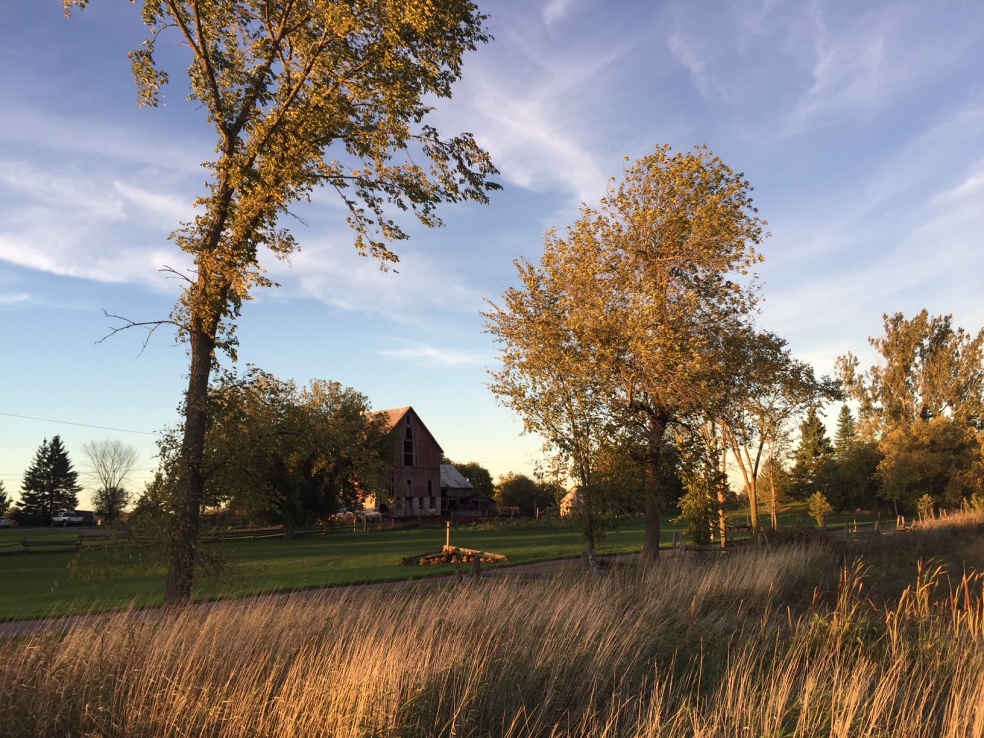 One of the many things I’m thankful for is living in the country. While I grew up in the suburbs of Toronto, I’m forever grateful we made the decision more than 20 years ago to get out of the city and move to rural roads where the air is fresh, the mosaic fields of fall spread before you like a harvest feast, and you can walk or drive for a country mile without seeing another car or person.

What I didn’t count on was how much the simplistic charm of the little hamlets and crossroads, and the people who inhabit them would grow on me.

For instance, I was driving to Tamworth the other night for a 4H meeting. The sign at the church in Croyden said, “Rhonda. Sunday. 6:30.”

It made me wonder who was Rhonda and what was she doing at the Croyden church on Sunday at 6:30? Was she getting married? Or was it an unhappy occasion—a memorial service for Rhonda? Was she young or old?

I did wonder if perhaps my friend Rhonda Nontell who has a cottage nearby was giving a gospel performance at 6:30 in Croyden, but then the sign would say “Rhonda. Sunday. 6:30. $5.” I mean most of us would pay at least $5 to see that performance.

These are the things that keep me up at night.

When walking, the proper way to wave to people is a slight nod of the head or raise of the hand for a half-wave. No full-out wave, or Queen wave, just an acknowledgement you saw them driving by.

If driving, there are two approved country waves. There’s the two finger wave, where you just raise two fingers off the steering wheel or the four finger wave with your four index fingers extended. A slight nod of the head is acceptable.

Over the years, I’ve experienced everything from discovering a newborn fawn at the end of my driveway, to eating my breakfast cereal with an escaped cow staring at me through the kitchen window, to chickens on our hot tub. Yes, country living is definitely better by a country mile.

This week’s #HappyAct is to give thanks for where you live. Here are some pictures I took on my drive and walk on the country roads near Tamworth the other night. 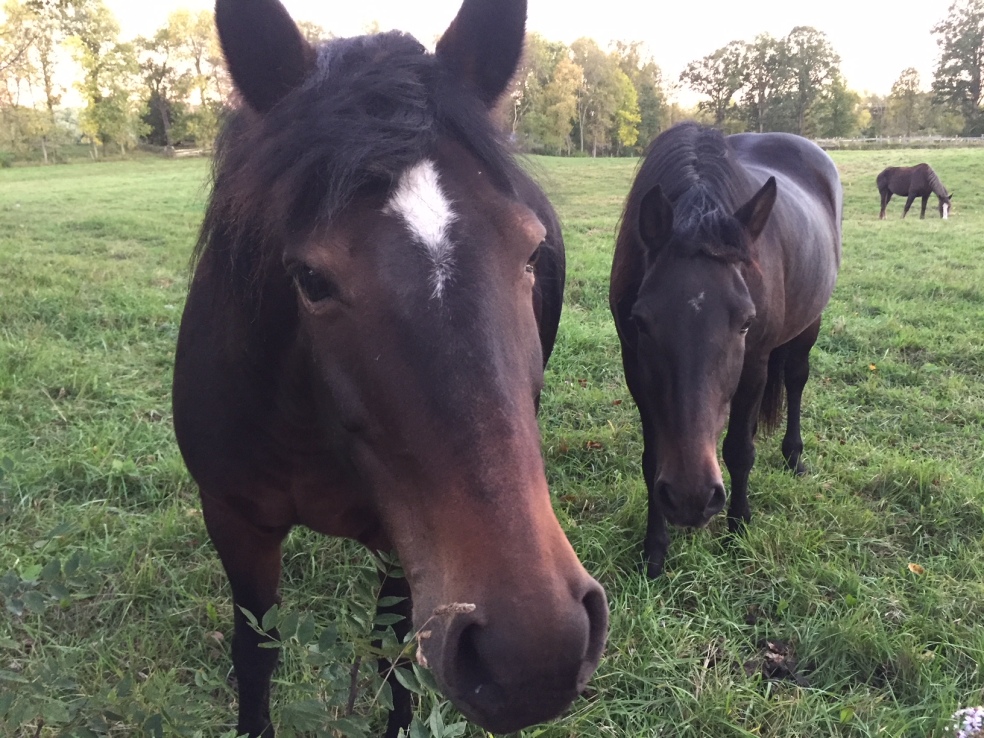 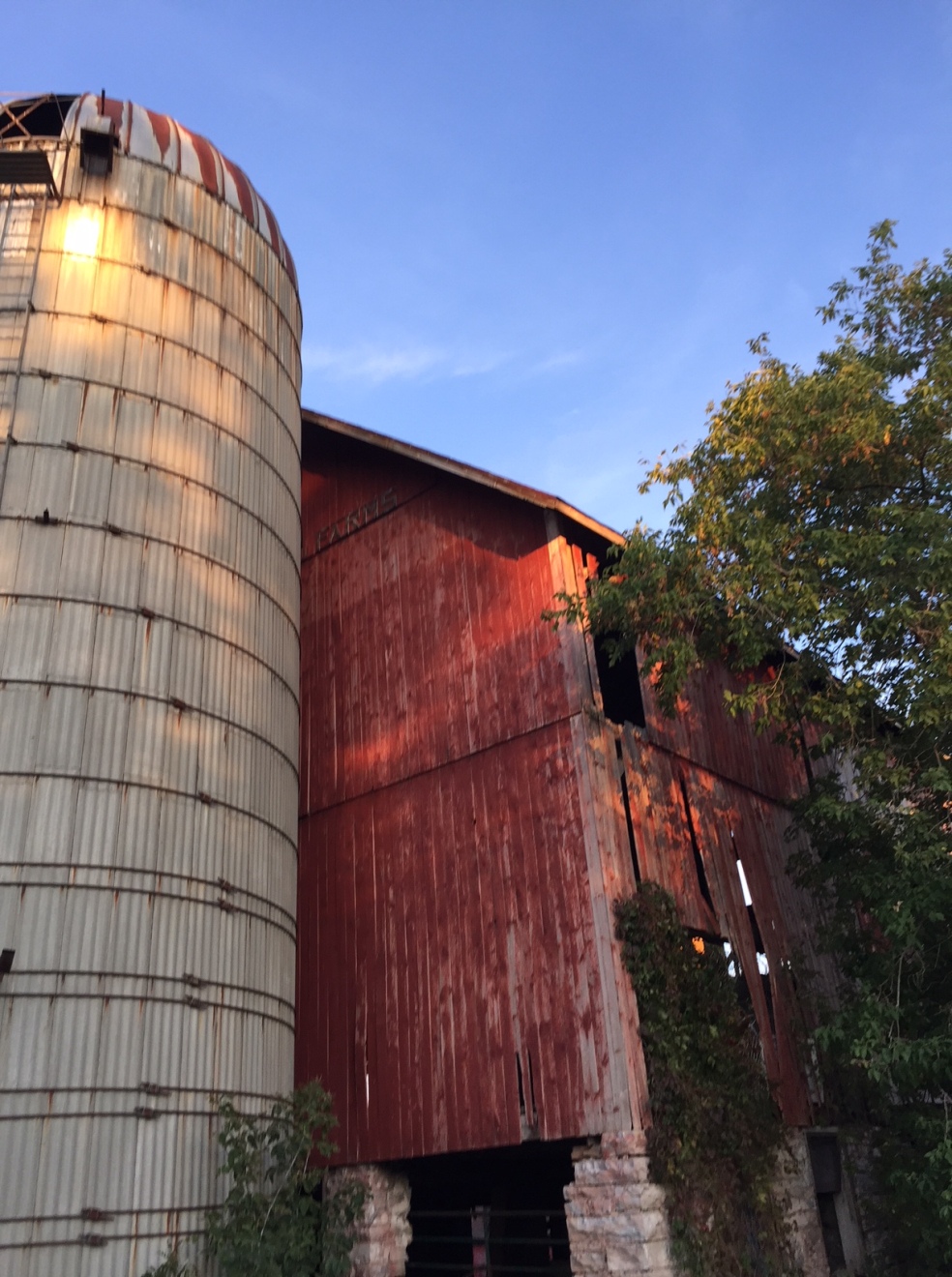 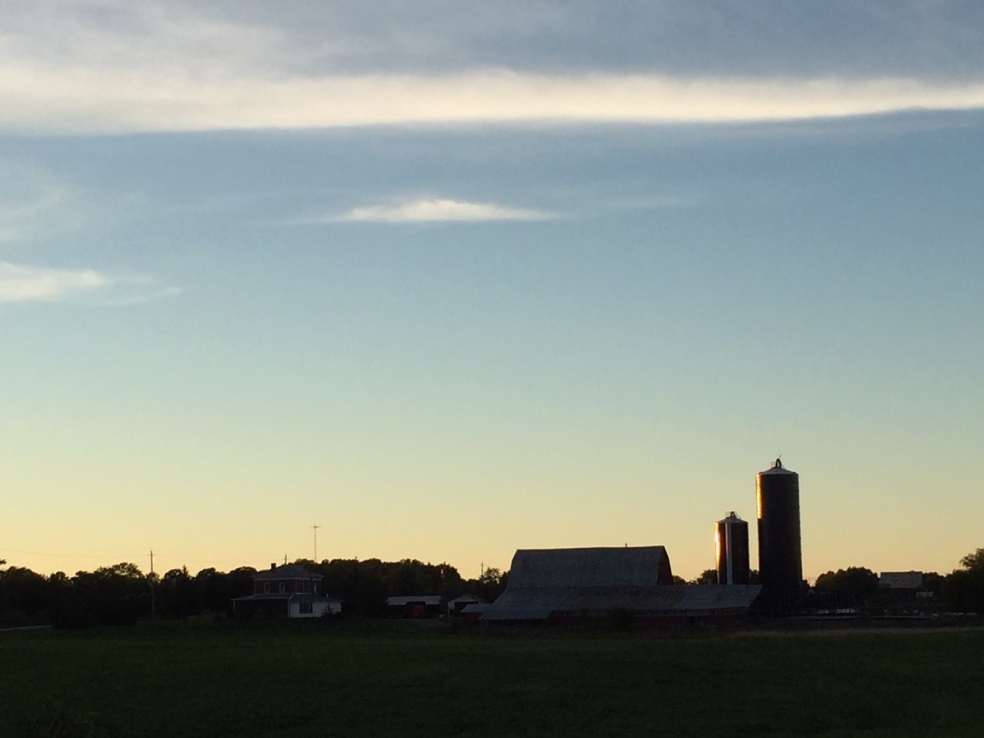