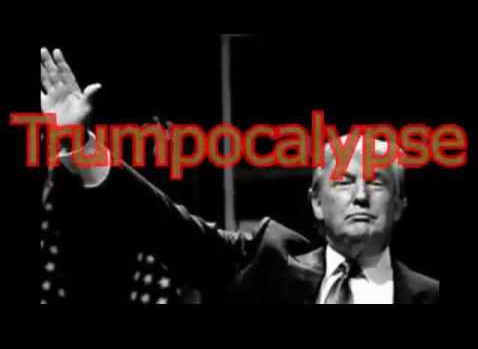 The Trumpocalypse is officially here.

I was astonished how many people refused to watch the inauguration. I’m not sure if they believed by watching they were endorsing what was happening before their eyes, or if it just sickened them too much to witness the carnage.

As a history major, I wasn’t about to miss this historic moment and witnessed Trump get sworn in with Dave and some colleagues at the Brew Pub, swilling our sorrows in beer.

It was all so surreal. Trump’s stump speech, evoking the vision of a country in decline and decay when unemployment is at one of the all-time lows and the United States is enjoying a period of strong economic growth. The cutaways to delusional loyal Trump supporters, crying in the sparse crowds of the Mall, fooled into thinking this man will make America great again.

The most fascinating part of Friday’s proceedings was seeing the reactions in the faces of the former Presidents and first ladies.

Bill Clinton had a plastered smirk on his face. Hillary sat by his side, with pursed lips and a glint of condemnation and disbelief in her eyes.

Barack Obama probably played the part best, and true to self, was gracious, putting the situation above himself.

But it was Michelle Obama who spoke volumes without uttering a word in her every move, gesture and look. Her sideward glances, lowered eyes and stalwart, I will get through this façade were those of a woman crestfallen, who knew everything she loved and cherished and had fought so hard to build would be disassembled in days by a man she abhorred.

Yes, the Trumpocalypse is here, but don’t despair. There are news reports by the dozens of Americans who are depressed and angry about the state of their country.

The best advice I’ve seen for weathering this storm is from advice columnist Ann Landers. A 24-year old woman wrote to Ann to say with all the conflict in the world and uncertainty, she was experiencing feelings of depression and anxiety.

Ann’s advice to her is this week’s #HappyAct: volunteer in your community. Do something to confirm or restore your faith in humanity. We can’t control the world around us, but we can make a difference and help make the world a better kinder place in our own backyard. It’s a start.

I moved to the country about 20 years ago. I wasn’t sure whether I was going to like it, having lived in the suburbs most of my life. Much to my surprise, I fell in love with this area, its vastness, beauty, community spirit and the freedom we have to roam and explore. I feel like I can breathe here.

Country life isn’t for everyone, and this post is not meant to wax poetic on the joys of country living. But I do believe that in today’s urban culture, we have become separated from the land that sustains us physically, emotionally and spiritually.

We have moved from a society of hunters and gatherers, to producers and manufacturers, to knowledge workers who use screens and devices to do our work. What toll does this have on us as human beings? Have we lost basic skills of survival? Have we lost a respect for our land and its sustainability? Have we suffered spiritually or emotionally from not being firmly grounded with terra firma?

I don’t know the answers to these questions. All I know is when we drive back from Toronto and pass the final townhouse in Oshawa and see the open fields, I sigh a big sigh of relief and rejoice in the sights and smells of the land on my way home.

This week’s Happy Act is to get your hands dirty and plant something. Saturday, May 3 is Community Tree Planting Day in Ontario. I’ll be planting trees twice this week. My kids’ public school is having a work bee to build a new garden as part of the school’s Eco Schools initiative (a big shout out to Union Gas for donating $1,000 and volunteers to help with this project). On Saturday, my entire family will be at Lemoine’s Point Conservation Area planting trees for the Cataraqui Conservation Area. If you go to the Trees Ontario website, you can find out where you can plant trees in your community this Saturday.

NOTE: Apologies for the late post this week for you Sunday morning regulars. Our home internet was down for the last five days–country living!

Here’s some pictures from the tree planting: Volunteers from Union Gas with a young helper, and my family at Lemoine’s Point in Kingston.