If you look around, there are signs everywhere but sadly, not many people stop and read them.

I do, I always have. I’m not sure if it’s the historian in me, or just an innate curiousity–I figure if someone thought it was important enough to erect a sign in a certain place, then it’s worth reading. It’s a trait that drives my family crazy.

On Friday, I went for my usual pre-game walk in Carleton Place before Clare’s hockey game. I was familiar with Carleton Place because Clare had competed in regattas there many times, but the arena was in a different part of town.

I started walking on a section of the Trans Canada Trail and came across a bridge that spanned the Mississippi River. There were several interpretive signs on the bridge, so I stopped to read them. Directly across from me was another bridge named Gillies Bridge in honour of John Gillies who built it in 1884.

John Gillies was the name of my father. Not the same John Gillies who built the bridge, and no relation to my knowledge, but it immediately caught my interest.

According to the Lanark County tourism website, lumber was king in the Ottawa Valley in the nineteenth century and John Gillies “was one of the industry’s crown princes”. He acquired the first sawmill in Carleton Place in 1866 and built the operation to employ 200-300 men to produce more than 20 million feet of board lumber a year. His mills eventually covered 300 square miles and spanned the greater part of six townships.

His Gillies Machine Works was his retirement project. After selling his mill operation, he built the Machine Works in 1875, manufacturing steam engines, water wheels, gearing, shafting and boat engines.

I thought this was ironic given Dave’s and mine luck with boat motors.

I stopped to admire the old abandoned millworks on the island, and then kept strolling, taking pictures of the old stone buildings since it was such a gorgeous sunny morning.

It was interesting to read about this famous namesake, and in a strange way, made me feel closer to my Dad, who has been gone for more than 20 years.

This week’s #HappyAct is to stop and read the signs some time. You never know what you’ll discover.

Yesterday as we were cleaning up the basement, I found an old Kodachrome box filled with 50-year old newspaper clippings. They were clippings of my Dad’s articles and photos from the time he was a reporter and photographer for The Globe in the 1950s and 60s.

My Dad never talked about his days with The Globe much. He was more likely to talk to you about the Blue Jays or the weather. But as I gingerly read each faded newspaper clipping, his life work washed over me and I marveled at all the famous people he met and photographed, from prime ministers and celebrities to royalty.

A Cosmopolitan View of a Cosmopolitan Centre (shown above). Dad had close ties with the Canadian International Air Show. For this picture, he must have been in the air and snapped this shot of an RCAF Air Transport Command Cosmopolitan airplane flying “past the new Toronto-Dominion Centre” highlighting a very different Toronto skyline from what it is today. 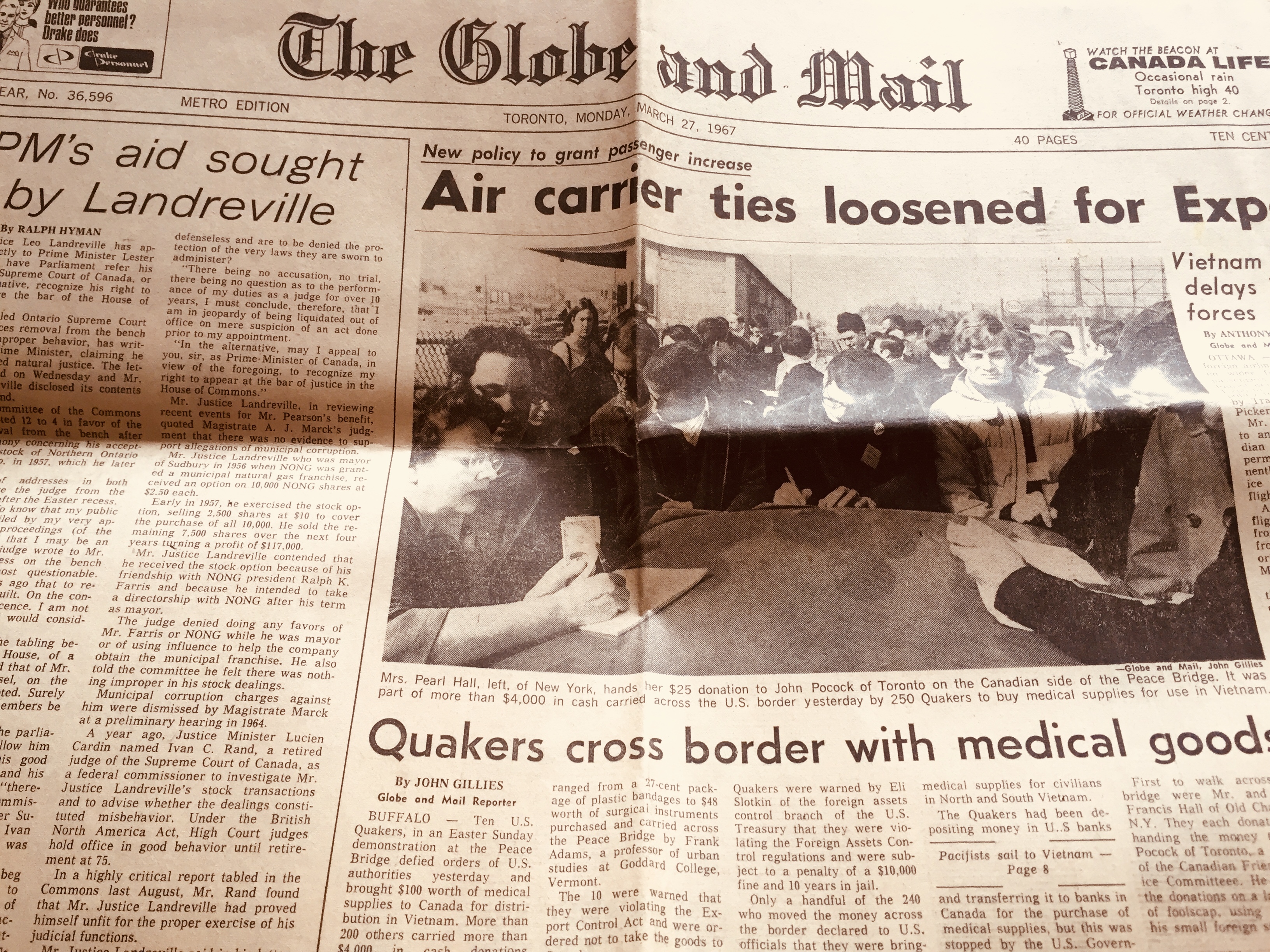 The Vietnam War monopolized headlines in the late 1960s. This photo was of US quakers who defied US authorities to carry medical supplies across the border into Canada to send to Vietnam.

I grew up minutes from Port Credit Go station and passed through the tunnel to get to the other side of the tracks almost daily. This is a picture of the prefabricated tunnels they installed in the late 1960s.

In another story called, “Biggest town to get name, council on December 9th”, Dad covered the pending amalgamation of the villages that formed the City of Mississauga. The other name being considered was Sheridan, “a small pioneer community on the township’s western border. Mississauga is favored to win, although a police officer once moaned: ‘Oh, no. We’ll never get it all on the door of the cruisers.” 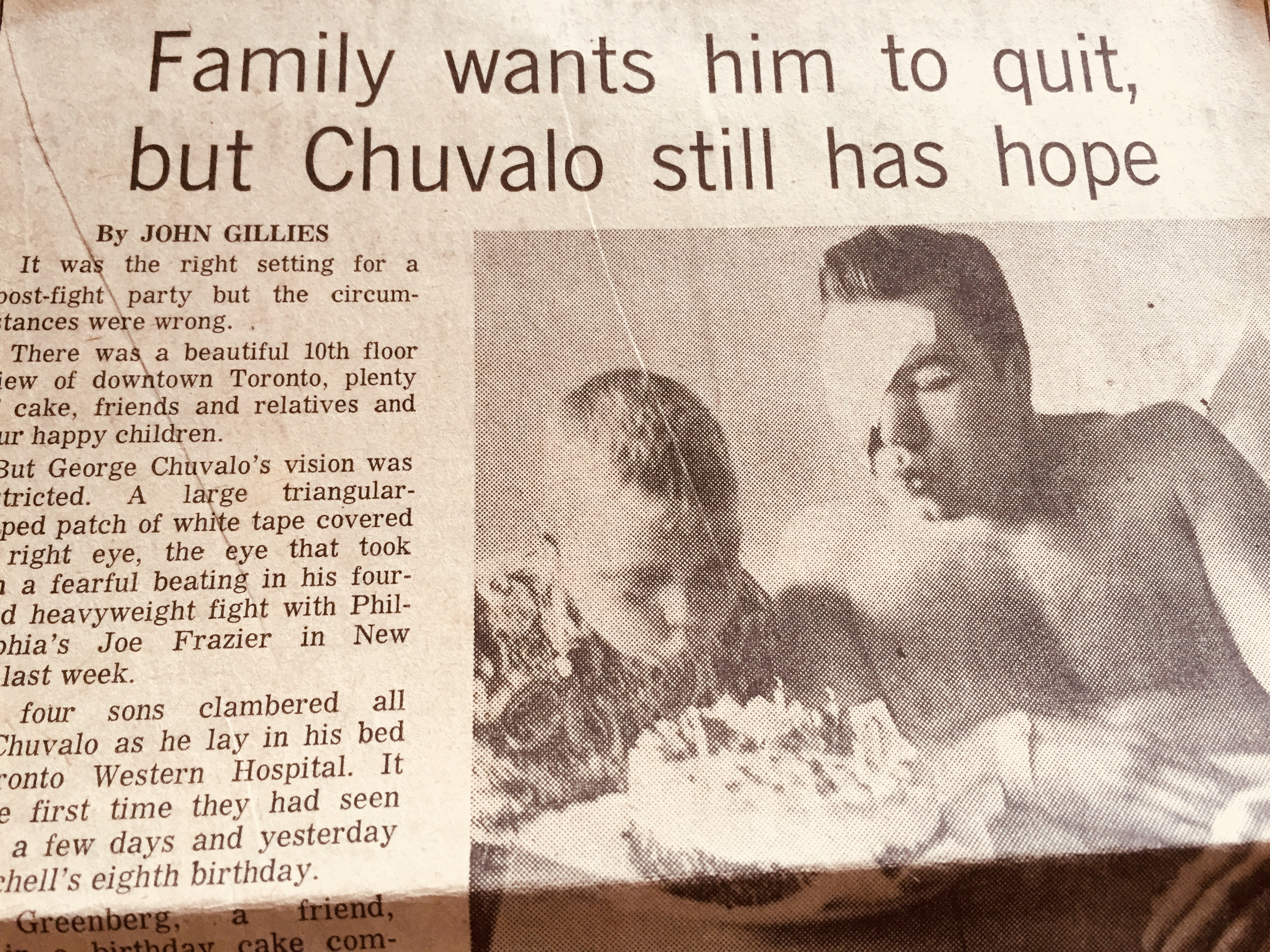 Family wants him to quit, but Chuvalo still has hope

This picture of five-time Canadian heavyweight and two-time world heavyweight boxer champion George Chuvalo with a patch over his right eye was taken after losing a heavyweight fight to Joe Frazier in New York City.

These next four photos showcase some of the fascinating people my father got to meet and photograph. From top to bottom: 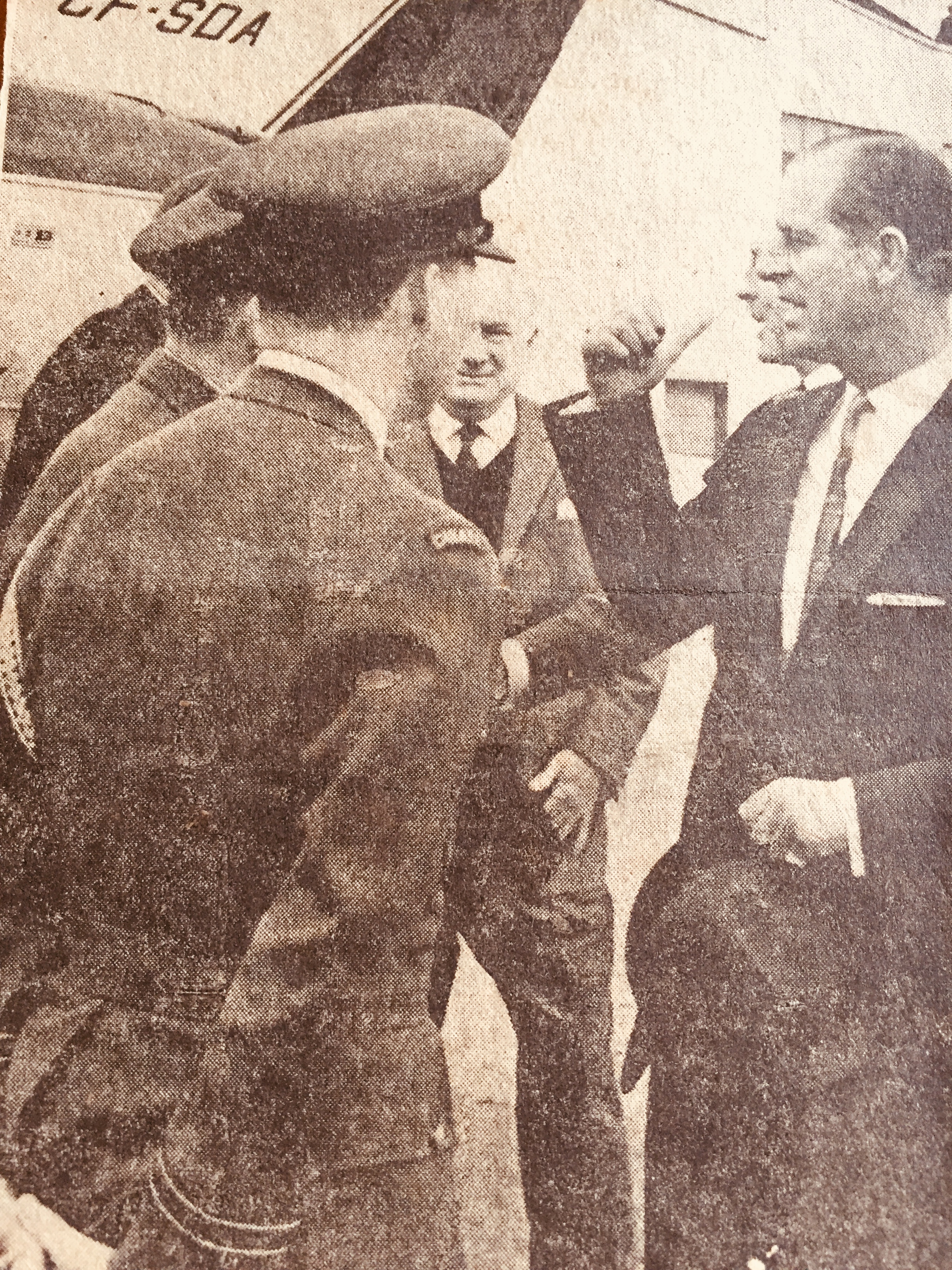 Prince Philip chats with RCAF officers on his arrival at Trenton yesterday. The Prince piloted the British built jet (background) on flight from New York lasting an hour.

On his way back to Ottawa after fishing trip to British Columbia, Conservative Leader John Diefenbaker confers with Davie Fulton at Toronto International Aiport. 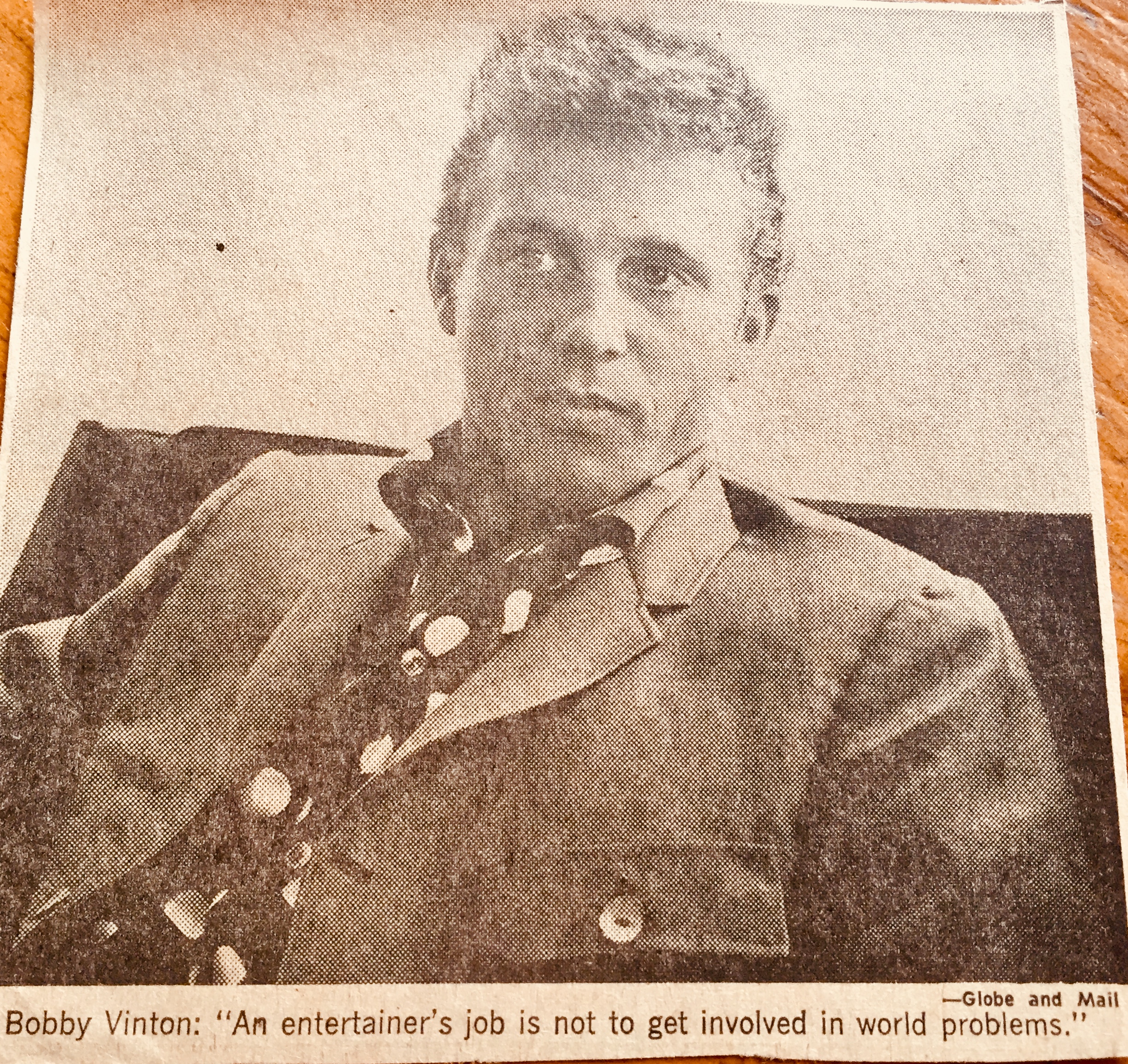 Crooner Bobby Vinton. In the caption, Vinton is quoted as saying “An entertainer’s job is not to get involved in world problems.” How times have changed.

There was one photo I wish I had to this day. I remember my Dad showing it to me. It was of the Beatles when they landed in Toronto in either 1964 or 1966 when they played at Maple Leaf Gardens. Dad photographed them for The Globe, but gave the photos to some teenage girls who lived up the street from us. Oh, but what I would give for those photos today.

Thanks for the trip down memory lane into Toronto the Good’s past, Dad. Miss you.

My father was a creature of habit. He had five shirts in his closet, one for Monday to Friday. He ordered the same meals when we went out for dinner and always golfed on Sundays in the summer. The neighbours set their clocks by his daily walk with our old dog Bailey.

When my Dad passed away 12 years ago, we held a celebration at a restaurant. There were lots of laughs and drinks raised in his honour, which is exactly how he would have wanted it. When we were putting together a small display for the restaurant, the full richness of my Dad’s life starting forming in the pages, and it struck me that my dad had a hidden adventurer in him.

There were pictures of him fishing in Northern Ontario and playing trombone at the Palais Royale in Toronto. There were photos of him standing nonchalantly in an airplane hanger in front of the plane he flew when he was in his 20s. There were photos of him meeting the Queen of England (as the press coordinator for the Royal tours in Canada in the 70’s, he met most of the royal family several times and dined on the Royal yacht).

This week’s #HappyAct is to do something adventurous. While often it’s the small moments and gestures in our lives that bring us the most joy and happiness, we all need a bit of adventure. My adventure this week will be tree top trekking in Muskoka next weekend with my girlfriends. And yes, I’ll be bringing my bug zapper!

To all you Dads out there celebrating Father’s Day, I hope it’s one of the best days of your life, and to my own wonderful husband, the “President Choice of Husbands”, thank you for being such a wonderful partner and father all these years.