Yesterday, we watched two great hockey games. And it didn’t cost us a dime.

We cheered on the Queen’s University women’s hockey team to an 8-1 victory over Windsor at the Memorial Centre. There were only about 100 people in the stands.

Then we watched one of Grace’s friends, who plays competitive hockey take on Ajax. It was amazing to me even at that age (14), at that level, what great hockey it was. Kingston came out on top 2-1.

Entertainment costs today have spiralled out of control. According to Forbes magazine, the average ticket price for a Toronto Maple Leafs ticket is now $368.60, the highest in the league.

Last year, the Toronto Blue Jays announced they’d be hiking ticket prices for the 2018 season. 200 level seats within the bases will cost over $50 a ticket.

My brother recently attended the Canada vs. Finland World Junior Hockey game in Buffalo. They paid $120 a ticket and the stands were half empty. 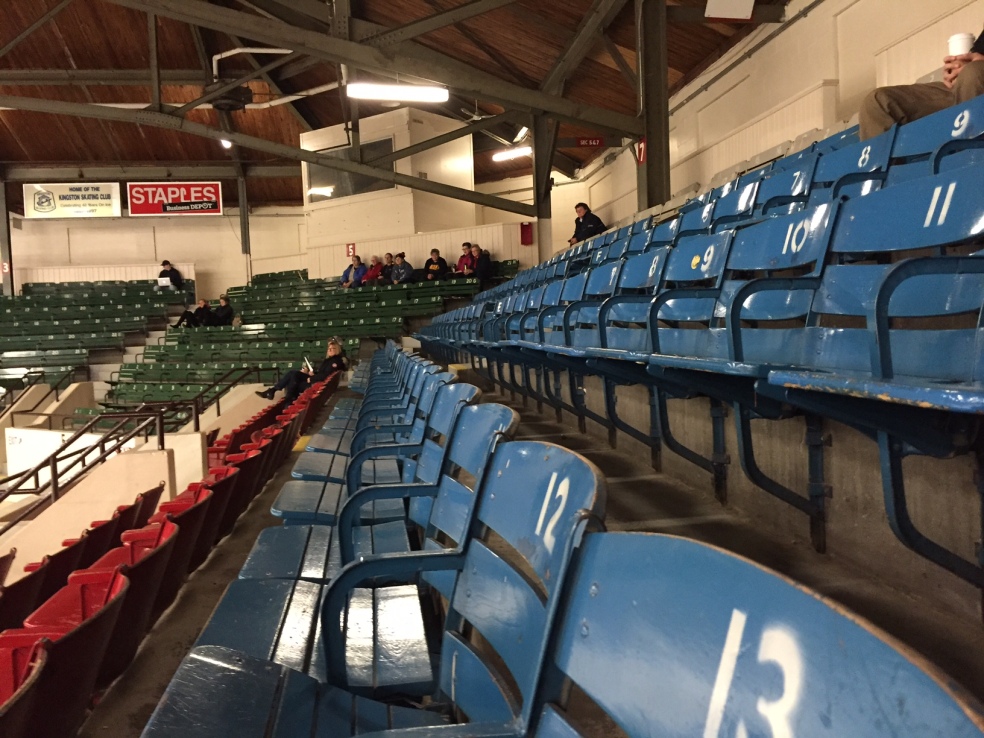 Every week I see Facebook posts of people who have taken their kids to $100 concerts.

It’s almost become cost prohibitive for a family of four to go to any of these events.

In every community, there are local sporting events and concerts for free or that are relatively cheap. You can also get much closer to the action.

Yesterday, I sat right behind the penalty box and Queen’s bench for a period of the game. It’s cool to see the interaction of the officials, coaches and players—you could hear all the conversations and see the coaching staff in action.

And unlike at a Blue Jays or Maple Leafs game where you’d pay $12 a beer and $8 a hot dog, we spent $4 for four bags of popcorn.

So let’s hear it for the cheap seats. If you like hockey, here are some cheap events coming up in our region: 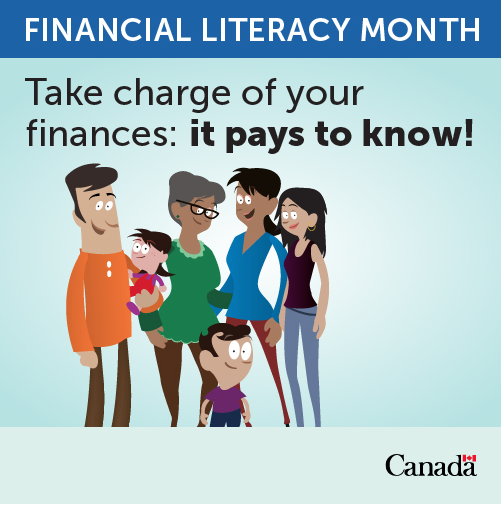 Here are six free sites and tools you can use yourself, or share with your kids or students to help you take care of your financial health.

1) FCAC is encouraging Canadians to take the MoneyFitChallenge at moneyfitchallenge.com. Test your financial knowledge to earn points towards Tim Hortons and Cineplex gift cards. You can register as an individual, as an organization or as an educator.

2) VISA Canada and Marvel have teamed up to produce comic books for kids on financial literacy. You can order Guardians of the Galaxy and Avengers Mad Money Skills at practicalmoneyskills.ca.

3) Score a hit with your teen by introducing them to Financialsoccer.ca to teach them basic money concepts.

4) myclassroomeconomy.org is a classroom economy that teachers can use to teach kids about money. Students earn school “dollars” for decisions like whether they will rent or buy their desks and more.

5) Newcomers to Canada can learn about how our banking system works with a free online course from abcmoneymatters.ca

6) My personal favourite: proliteracy.ca is a great site for planning for post-secondary education costs. You can enter the number of years your child will be in school, which university or college they plan to attend, which program and whether they will live at home or not. It will tell you what the total cost will be for tuition, rent, and expenses like food, books, etc. I ran the numbers and the total cost for Grace if she goes to four years of university was $86,000 or $61,000 if she lived at home. The site also has a great blog and information on what grants and scholarships are available. You can even share your profile with family members and ask them to make donations towards your child’s education! 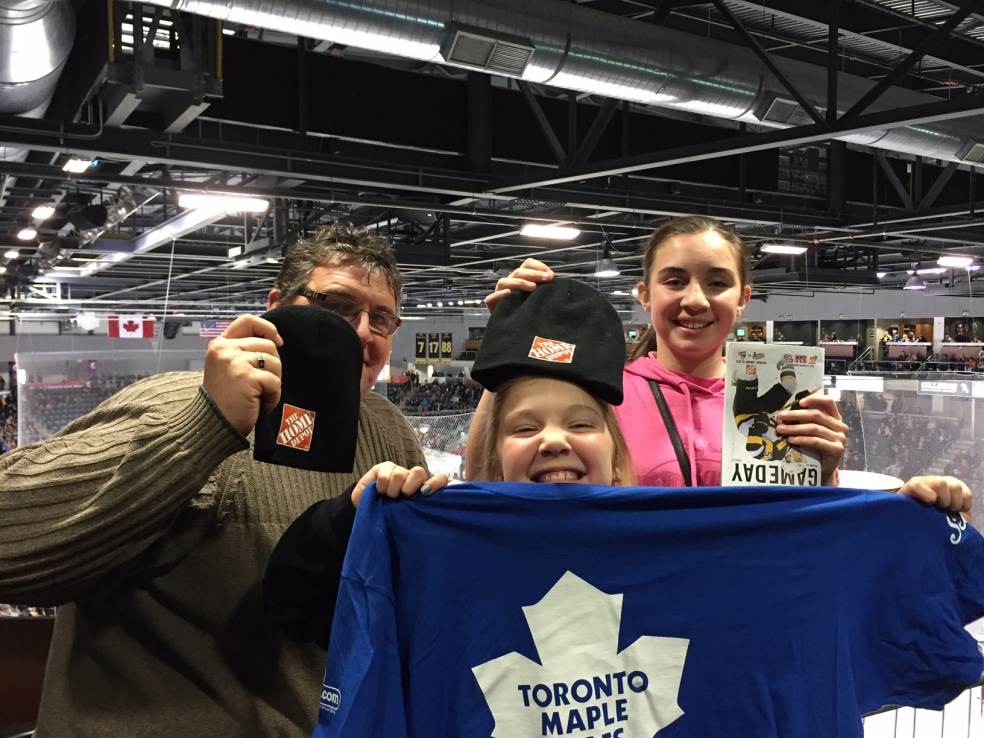 Last night we were at the KROCK Centre watching the Kingston Frontenacs Game beat the Niagara Ice Wolves. It was blue and white night, and after the whistle, they were throwing Maple Leaf t-shirts into the crowds. Home Depot held a drilling competition during one of the intermissions and were giving away free hats. We scored on both fronts at the Fronts!

Then on the way home, we’re in the Tim Hortons drive thru and they made a mistake on our order so we scored an extra two donuts and hot chocolate. It was a banner night in the Swinton household.

Scoring free stuff is great on the pocketbook, but it’s also just pure fun. Here are seven ways you can score free stuff:

This week’s #HappyAct is to see what you can score for free this week. Just be prepared for the inevitable argument when your nine-year old insists on wearing her new Maple Leafs t-shirt to bed when your Canadiens loving spouse bans all blue and white in the house. What’s your best free stuff score? Leave a comment!

Someone once said you need to focus on the future, not the past, to be happy. While I think there is some truth in this statement, I think reflecting and learning from the past is valuable.

So in the spirit of reflection, here’s my Eleven Best Happy Acts of 2015 (once again eleven “for that extra push” in the immortal words of Nigel Tufnel). Most of these should inspire, but some are just for fun!

This week’s #HappyAct is to catch up on any happy acts you missed in 2015 and look forward to happiness in 2016. Happy New Year everyone and thanks for reading!

I’ve been thinking a lot about money lately. November is Financial Literacy Month, and once again my company, Empire Life, is issuing a challenge: to take action this month on the one thing you need to do to feel better about your financial health. We call it the Financial Weight Loss Challenge—lose the weight of whatever financial worry is weighing you down.

For the past two weeks, I’ve been trying to decide what action I will take this month. Last year I said I was going to change to a cheaper cell phone plan, finish a spreadsheet I’d started with all our insurance and investment policies, and start saving more for the kids’ education. While I didn’t get it all done last November, I followed through on all three things.

When it comes to money, we’ve always taken a balanced approach between saving and living. Right now, living is winning out. So my actions this month will be modest: sign up for ebilling for those final bills that are still mailed to me (bonus points for going green, something I should have done a long time ago), put a few extra payments on our line of credit, and waste less food in the house, which for us mainly means cleaning out our fridge more often.

That will leave a little money in the bank to dream. And while the last thing we need is another boat, you never know what might show up in the driveway or where the wind will take us on our travels next year.

This week’s #HappyAct is to take the Financial Weight Loss Challenge and share what you’re going to do to lose the weight of financial worry. Post a comment here or on the Empire Life Facebook page. You can also help support Pathways to Education if you share one of our posts with the hashtag #EmpireFLM this month. Every time someone uses the hashtag in November, we’ll donate .25 cents to Pathways to Education. Take the challenge: how will you lose financial weight? Leave a comment. 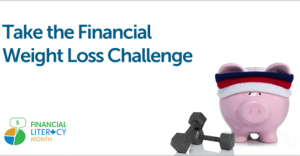 This was instilled into me long before I started working in the financial services industry. I remember my Dad saving his quarters, dimes and nickels in piles of jars on his dresser to pay for our family vacation each year.

Since then, I’ve lived by a few simple money mantras: live within your means, pay yourself first, buy insurance to take care of your loved ones. But just like everybody else, I know there are other things I should be doing to improve my financial health.

That’s why I was so excited when we came up with the idea at work to promote the launch of our new social media channels and Financial Literacy Month with a Financial Weight Loss Challenge.

The idea is simple. Think about the one thing you know you should do about your finances that you’ve been putting off and take action in the month of November. We recently met with our financial advisor to increase our savings for the kids’ education and our retirement, but there’s two other things on my list: finishing a spreadsheet of all our policies and switching cell phone providers (anyone with any tips on this one, let me know!)

Money can’t buy happiness, but it can buy you peace of mind.

This week’s #HappyAct is to take the #FinancialWeightLoss challenge. Take action this month to take control of your finances and lose the weight of whatever financial decision is weighing you down. Challenge your friends and family members by sharing the Financial Weight Loss challenge post on the Empire Life Facebook page (and like us while you’re there). We’re also running a contest where you can win either a $100 VISA gift card or iPad mini. Be sure to share what one action you are going to take.